Film / In the Fade 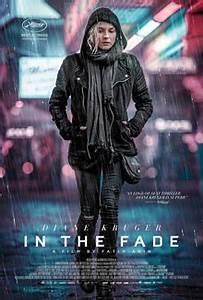 A 2017 German drama, the film opens with Nuri Şekerci (Numan Acar), a Kurd from Turkey in Germany, being released from prison upon completing a four year sentence for drug dealing, then marrying his girlfriend Katja (Diane Kruger). The couple are shown together years later with their son Rocco, and living happily. Sadly, their family's domestic bliss is then tragically shattered when a bomb rips apart Nuri's office in a predominantly Turkish section of Hamburg, killing both him and Rocco. A devastated Katja reels from her great loss and struggles to deal with it, growing intent on insuring the murderers pay for their crime no matter what.