Death Is a Loser 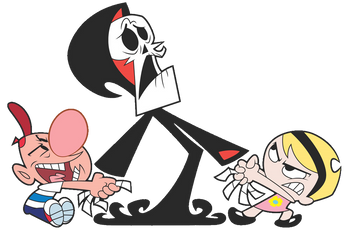 He Coulda Been a Contender, now he just the plaything of a pair of brats.
"I can't believe we just Melvined Death!"
— Bill, Bill & Ted's Bogus Journey
Advertisement:

The Grim Reaper or any god of death is usually a big deal. They're master of one of the most fundamental forces of nature, carry souls off to the afterlife and usually look intimidating. At least, that's how they're usually characterized. But sometimes the scariest thing about the reaper is their job. They always lose Chess with Death, have trouble getting mortals to come with them and nobody respects or cares for the job they do. And if there are other gods, they tend to be The Friend Nobody Likes. Maybe there are multiple incarnations of death, and one of them happens to be the Butt-Monkey of the group.

As death in Real Life is permanent, having something as inevitable and final as death be portrayed as a joke can serve as catharsis for the reader/viewer, or being seen as a joke allows someone to pity them. Maybe the idea of such an important and powerful entity being a joke is hilarious in itself. Of course, they're still The Grim Reaper or a god of death, so don't be surprised when they turn the tables and show a badass side to them.

Sister trope to The Devil Is a Loser and Loser Deity, when Satan and a god/the God is the Butt-Monkey, respectively. While it can overlap with Don't Fear the Reaper, that trope is where Death isn't scary because they're nice, not because they're a loser. Compare Hanging Up on the Grim Reaper, where someone tries to push away Death, but that doesn't mean it's a recurring problem or Death's necessarily a loser. Sub-trope to The Grim Reaper.

With Victor's experiments undermining him, Death has become rather pathetic.

With Victor's experiments undermining him, Death has become rather pathetic.