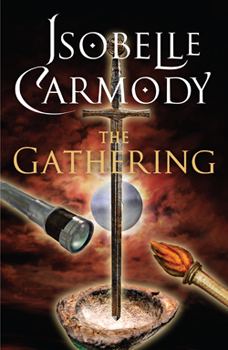 "Sometimes you get a feeling about a thing that you can't explain; a premonition of wrongness. Mostly you ignore it the way you would a little kid tugging at your sleeve. You think: what do kids know anyhow?"
Advertisement:

The Gathering is a young adult horror/fantasy novel by Isobelle Carmody. Unlike many of her more famous works, The Gathering is set in the real world, specifically 1990s Australia. It follows teenage protagonist Nathaniel Delaney, who has recently moved with his mother to the seaside town of Cheshunt. This is only the latest of many moves they've made throughout Nathaniel's life, and he's not too happy about it.

Nathaniel develops an instant dislike for their new home, and it doesn't help that his new school, Three North, stinks due to its proximity to an abbattoir. He may have a point, however, for things are far from right in Cheshunt. It may seem pleasant and peaceful, but it's a growing but indefinable threat: Its citizens are cowed into obedience, its students discouraged from expressing any acts of individualism, the police and governing bodies are all under the control of the school's rather creepy headmaster, Mister Karle, and the teachers have some frankly disturbing ideas about ants being a higher lifeform than humans. A long time ago, the town was the site of an act so terrible that its aftereffects have permanently "bruised" the earth, and the shadows of malevolence still echo into the present day. Several decades earlier an attempt was made to quench the evil once and for all. It didn't turn out well, and now the cycle of evil is reaching its peak once again.

Three North's students are "encouraged" to join a local youth club named The Gathering which of course, is also not what it seems, and refusals are not taken well. Within weeks of arriving, Nathaniel stumbles on a meeting of three students from Three North: Danny Odin, Indian Mahoney and Nissa Jerome. A fourth member, Seth Paul, a school prefect, is not present. The group is known as The Chain, and they tell Nathaniel they have been brought together by the "forces of light" to fight against the deep evil in Cheshunt heralded by Mr. Karle (whom they refer to as "The Kraken"). When Nathanial is caught and questioned by The Chain, they are all informed by the group's prophetic guide, Lallie, that Nathaniel has chosen to answer "The Call". He is the final of the chosen members of their group, and his arrival heralds the beginning of their battle. They must find and obtain several symbols which will be essential in their task to "Heal the sorrowing earth" and restore balance to Cheshunt. But before they're able to do that they need to face up to the darkness inside each of them, and The Kraken, not to mention most of the town, are all rising up in force against them.

Many themes are portrayed in this novel including: good vs evil, inner struggle, human nature, conformity vs individuality, friendship and cooperation. A TV series has apparently been in Development Hell since 1997.

Not related to the Highlander franchise's concept of the same name or the Magic: The Gathering card game and related media.