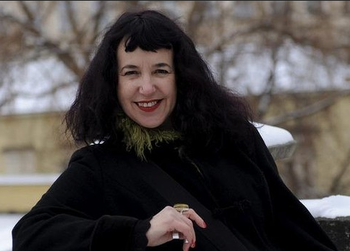 Isobelle Carmody is an Australian science fiction and fantasy writer, known best for The Obernewtyn Chronicles. Isobelle Carmody has written several standalone novels, and is currently working on at least three series.

She has a bit of a reputation for taking a long time to finish what she starts. The first Obernewtyn book was first published in 1987 and the most recent one, The Stone Key, was released in 2008, with the penultimate book due to be released in October 2011 and the final book still to come after that. Her other current series have been waiting a slightly shorter length of time to be concluded, closer to a decade, but there's still plenty of time for that to build up.

Despite her constant schedule slip, she is still one of the most well-known and respected fantasy authors from the land down under.note  Although this still doesn't stop her fans screaming in frustration when another year goes past without the sequel they've been waiting for!

Works by Isobelle Carmody with their own trope pages include:

Other works by Isobelle Carmoday provide examples of: