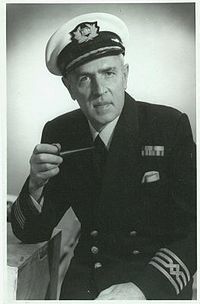 A. Bertram Chandler (1912-1984) was a science fiction writer who was born in England, but emigrated to Australia in 1956, where he enjoyed his years of greatest success. The "A." stands for Arthur, but he never used that name professionally; in fact, he sometimes dropped the "A." entirely. Some of his early stories were published under the pseudonym of George Whitley.

Chandler served in the Merchant Marines of both his native country and his adopted one, and his shipboard experience was a major influence on his fiction. He is best known for his extensive "Rim World" series, and especially the "John Grimes" stories. Grimes started as a minor character in another Rim World book, but ended up as Chandler's most popular protagonist, featured in over twenty novels and many short stories.

While his greatest success was in Australia, where he won several Ditmar Awards for Best Australian Science Fiction, he continued to sell quite well in the UK and US as well.