Wight in a Wedding Dress 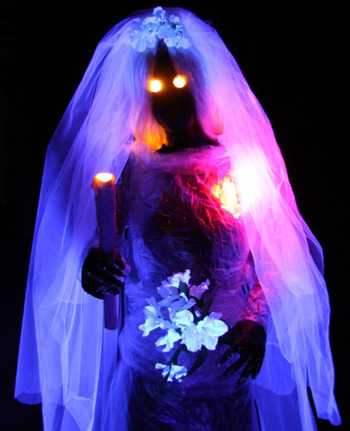 Till death do us part!
"Brides walk the land cloaked in sorrow, searching for love - the only thing they ever wanted during their lives. Or maybe they're zombies who think they look good in wedding dresses. Either way, BE AFRAID."
— Tour Book description of the Bride, Brütal Legend
Advertisement:

A darling of Gothic Horror, ghosts in wedding dresses are common sighting both in fiction and Real Life accounts. Often they are the ghosts of women who have died on their wedding day, forever haunting wherever they died without the satisfaction of saying her vows and consummating the union.

The idea is not just applied to disembodied spirits. Zombies and vampires are also likely to wear them, often stained with gore to emphasize the blasphemy of such unholy abominations wearing clothes meant for a sacred occasion.

Sub-Trope of Incongruously-Dressed Zombie, Jacob Marley Apparel, and Ethereal White Dress. May be the result of being Widowed at the Wedding. If purposefully invoked for real weddings, see Themed Wedding. See also Cute Ghost Girl, Stringy-Haired Ghost Girl, Death and the Maiden, and Living Statue (The Venus of Ille and the like).