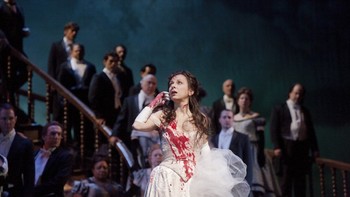 Natalie Dessay in one of her most famous roles
Advertisement:

Lucia di Lammermoor is a tragic opera by Gaetano Donizetti, loosely based upon Walter Scott's novel The Bride of Lammermoor, and with a libretto by Salvadore Cammarano.

The opera is essentially Romeo and Juliet in Scotland. It follows Lucia Ashton and Edgardo di Ravenswood, two Star-Crossed Lovers from opposing houses who are having a secret affair. Then one day, Lucia's brother, Enrico, finds out about the affair, and when Edgardo leaves for France, he forges a letter to convince Lucia that Edgardo has betrayed her, so then he forces her to marry another nobleman, Arturo.

However, Lucia is so devastated with grief that she starts to lose her sanity. And when Edgardo bursts in on the wedding, he curses Lucia out for betraying him, and ends up being challenged to a duel by Enrico. As a result, poor Lucia goes mad and kills Arturo in their wedding bed, and then makes her appearance before the shocked wedding guests, singing her famous aria "Il dolce suono" and imagines that she is marrying Edgardo, and then collapses and dies.

Meanwhile, Edgardo is hoping to die at Enrico's sword in the duel when he learns of Lucia's death, and how she died saying his name. Devastated and hurt, Edgardo stabs himself and dies, hoping to reunite with Lucia in Heaven.

One of the most famous works of the bel canto period, Lucia di Lammermoor was the opera that established Donizetti's career as a successful opera composer shortly after the 1835 premiere at the Teatro di San Carlo in Naples. Other factors helped, including Gioachino Rossini's retirement and Vincenzo Bellini's death, as well as a large fascination with Scotland's legends and history throughout Europe. Donizetti also revised the score for a French version of the opera, titled Lucie de Lammermoor, one which takes away some characters and changes a few things around.

These days, it's a main staple of the operatic repertoire, starting mainly in the 20th century when famous sopranos helped bring new life into the opera. Some of these famous sopranos include Maria Callas and Joan Sutherland, and the role of Lucia became signature roles for them.