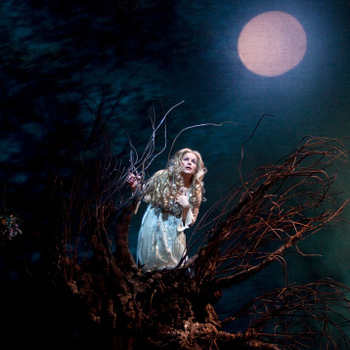 Rusalka is one of 10 operas by Czech composer Antonín Dvořák. With a libretto by Jaroslav Kvapil based on Slavic folklore and the fairy tales of Karel Jaromír Erben and Bozena Nemcová, Rusalka is also Dvorák's most famous opera. It first premiered on March 31st, 1901 at the National Theatre in Prague.

The Slavic version of The Little Mermaid, our heroine Rusalka is a water nymph who lives in a lake instead of the ocean. She falls in love with a human prince and wishes to become human, so Rusalka goes to Jezibaba, the witch, to do so. Jezibaba demands that Rusalka gives up her voice, which is a terrible thing to do in an opera, but she does it anyways. The Prince quickly becomes disenchanted with the mute Rusalka, falling instead in love with the evil, manipulative Foreign Princess, and ends up being cursed by Vodník, Rusalka's father. This being an opera, there is no happy ending. Betrayed, Rusalka returns to her lake, where she learns she must stab the Prince in order to become a water spirit again. But she doesn't have the heart to do so, and thus ends up condemned to be a demon of death.

Later on, the Prince arrives, on the verge of death. He meets Rusalka and begs her to kiss him, even though he knows her kiss will mean death and damnation. He and Rusalka sing a ravishing love duet, at the end of which they kiss. The Prince dies, and Rusalka returns to the lake, now a vengeful spirit of death.

Rusalka is one of the few Czech operas that tends to be a staple of opera companies worldwide, and the titular role herself is quite demanding, even if she doesn't sing for almost an entire act. The "Song to the Moon" aria from Act I ("Měsíčku na nebi hlubokém" in Czech) is the most popular excerpt from this opera, and is frequently performed for concerts and recitals.

This Work Provides Examples of: