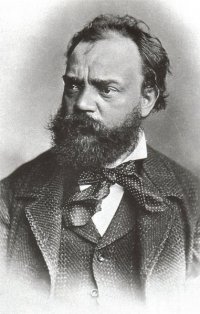 Antonín Dvořák (to avoid possible embarrassment, it's D(ə)-VOR-zha(h)k, not Dvor-rak) (8 September 1841 — 1 May 1904). The most famous of Czech composers, Dvořák's musical idiom is infused with the traditions of his native Bohemia. In addition to this musical nationalism, Dvořák also exemplified many other characteristics of the late Romantic period, including writing for large orchestras, lush melodies, and powerful, emotional climaxes. The influence of Johannes Brahms shows on Dvořák in that Dvořák declined to assign programs to his symphonies and often used classical forms. On the other hand, the Wagnerian influence also strongly manifests itself in Dvořák, especially in the tone poems and operas. Dvořák, a prolific composer, created works in almost all genres. These include 9 symphonies, a piano, cello and violin concerto, 10 operas, numerous religious works, 14 string quartets and other chamber works, and many attractive small scale pieces like the Slavonic Dances. These 16 short pieces based on Bohemian folk tunes helped launch Dvořák's career and were inspired by Brahms's similar Hungarian Dances.

) from this symphony has become a popular Standard Snippet. He wrote it while staying in the United States, during which he studied and admired African American spirituals. Many scholars have argued that the thematic materials of the symphony are in fact based on spirituals, though Dvořák always denied this. Music from the exciting and powerful Allegro con fuoco ending movement

of this symphony was later stolen by John Williams for use in Jaws, though these days it may be better known for its use in one of the climactic battles of the anime One Piece. Ironically, the use of the "Largo" in adverts by British bread manufacturer Hovis has led to be it being regarded as a leitmotif for Yorkshire in the UK.note  Never mind that the Hovis advertisement which first used the "Largo" was filmed on a hill in Dorset, on England's south coast!

His other two popular symphonies are Symphony No. 7 in D minor (1885), Op. 70 and Symphony No. 8 in G major, Op. 88. The latter contains another lovely slow movement. All of Dvořák's symphonies are worth checking out, though the last three are the ones most often performed and recorded. note  Symphony No. 1 "The Bells of Zlonice" in C minor (1865) is starting to develop a following amongst classical music musicians and fans, although Dvořák himself dismissed it as "Juvenilia", and showed no desire to revisit it after the manuscript was lost (later found by a very distant relative in a music shop, and revealed to the world in 1923, 19 years after Dvořák's death.)

His Cello Concerto in B minor, Op. 104 is arguably the greatest work for that instrument. Dvořák again wrote this work while in America. The Piano Concerto in G minor, Op. 33 and Violin Concerto in A minor, Op. 53 are both excellent, attractive pieces, though not as distinguished as the cello concerto.

Of the 10 operas Dvořák wrote, only Rusalka, Op.114, first performed in 1901, has found modern day success. Essentially, Rusalka is a Slavic version of "The Little Mermaid", where our heroine Rusalka is a Czech water sprite who lives in a lake instead of an ocean (there being no oceans in Bohemia, of course). Falling in love with a human prince, Rusalka wishes to become human, and goes to the Witch in order to do so. The Witch demands that Rusalka must give up her voice, and this being an opera we know this is a terrible thing to do. The Prince quickly becomes disenchanted with the mute Rusalka, falling instead in love with the evil, manipulative Foreign Princess. This being an opera, there is no happy ending. Betrayed, Rusalka returns to her lake, but refuses the option to undo everything by killing the Prince, so she becomes a vengeful spirit of death. The Prince arrives. He and Rusalka sing a ravishing love duet, at the end of which they kiss, the Prince accepting the kiss of death from her as his penance. The Prince indeed dies, and Rusalka returns to the bottom of the lake, lost forever to her family in the lake proper.

The opera shows the influence of Richard Wagner regarding subject, themes, and music. Dvořák employed a story from his national mythology, and likewise focused on overwhelming passionate love and betrayal ending in orgasmic death. Musically, the opera shows Wagner's influence in using leitmotifs, evocative nature portraits, and sensual love duets. The most famous music from the opera is Rusalka's "Song to the Moon." You can listen to the lovely Renee Fleming sing it here.

This aria is featured in the movie Driving Miss Daisy.

Dvořák's music has an immediately attractive, deep soulful quality that has made him one of the most popular of composers. One of the last composers of the Romantic era, he contributed immeasurably to the world's treasure of music. Dvořák's salient feature, the characteristic that makes him beloved today, was his magical talent for creating very many very beautiful melodies. Perhaps only Pyotr Ilyich Tchaikovsky can be said to equal Dvořák in this respect.

He was distantly related to alternate keyboard layout inventor August Dvorak (who pronounced his name as it was written in English), and may or may not have been related to film actress Ann Dvorak (she claimed to have distant relatives with the name Dvorak, and found it more attention-grabbing than her birth name of Anna McKim).