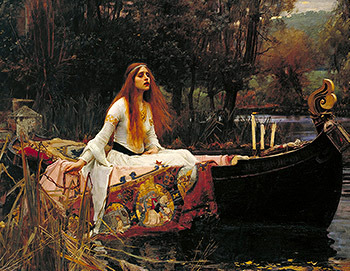 "The Lady of Shalott", by John William Waterhouse (1888). .
"He was never mine to lose."
— Eponine, Les Misérables
Advertisement:

She is beautiful. She is sweet. She is sincere. So why can't she get the guy already? The Unrequited Tragic Maiden is (usually) a female character that seems to have all the perfect characteristics to make her the ideal romantic interest or even The Ingenue of the story, but alas, for some reason the object of her affections does not view her as such. Usually this is because she is overshadowed by another female character who has captivated the heart of the guy, placing the Unrequited Tragic Maiden on the sideline only to be seen as a friend or ward.

No matter how painful her yearning for love is, the Unrequited Tragic Maiden never truly achieves her happily ever after with the one she loves. She endures it all with a sad smile and is often reduced to a tragic fate. She is the poster child of Unrequited Love. In the end, she will often sacrifice herself or her happiness to make sure her beloved is happy.

Compare to Hopeless Suitor, Did Not Get the Girl and Romantic Runner-Up, who is the brother of this trope but usually with a less tragic end. May wind up becoming The Lost Lenore after death if the person they loved grieves for them, blames themselves for her death or else only discovers that he loved her when it was too late. Contrast to Green-Eyed Monster, in which the woman is more prone to sabotage and a devious nature unlike the docile nature of the Unrequited Tragic Maiden.

This is starting to become either a Discredited Trope (as romantic portrayals of females become less dependent on the male characters), a Deconstructed Trope (to showcase a point-of-view of it being an unrealistic idea of romantic love) or a Gender-Inverted Trope (since male examples are starting to be more common).