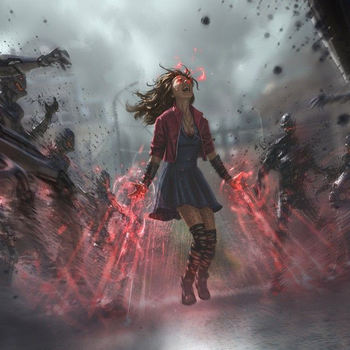 Beware the Scarlet Witch when her emotions overwhelm her. Her pain will change the world.
"She's grown too gigantic and unstable! Women, am I right fellas?"
— Santa Claus, Robot Chicken
Advertisement:

This trope is about a female character who starts off in a pretty good place. She's surrounded by people and probably wants to do good. But then somehow, she comes into great power (political, supernatural, or otherwise) and proceeds to completely lose it.

Maybe she cannot control this new power and winds up causing great damage. Maybe she was repressed and isolated from a young age, providing the foundation for her ensuing instability. Maybe the event that gave or awakened her superpowers was very traumatic. Maybe Power Corrupts or she becomes Drunk with Power, making her mental health take a dramatic nosedive. Maybe the power amplified "feminine" weaknesses that were already there. Either way, she eventually becomes a danger to herself and others. The story mines great drama from contrasting this pretty young thing with her ensuing corruption and the mess that she inevitably causes.

This trope has its roots in Women Are Delicate, particularly the Hysterical Woman — the portrayal of women as emotional and unstable, and thus ill-equipped to handle the responsibilities that come with their newfound power. Thus, many superpowered versions of this trope will explicitly tie the woman's destructive potential to her feelings, if not her very womanhood. While there are powerful male characters who fall from grace, the ways in which they do so are much more varied than a woman doomed to lose control due to her feelings or a lack of mental fortitude. Bonus points if it falls to existing male characters to clean up after the Unstable Powered Woman, often by arranging it so that she loses the power that she obtained.

Compare the Good Girl Gone Bad, where a female character becomes nasty and villainous due to a tragic event, the Mystical Waif, a frail young woman with mysterious powers, and the Apocalypse Maiden, which also juxtaposes an often young and female character with mass destruction — the end of the world. Also compare The Ophelia, with which this can overlap if she is portrayed as lovely despite her insanity, and Puberty Superpower for another situation in which someone suddenly acquires a power and may find it difficult to control; in some cases, it overlaps with this trope if a female character acquires her powers during puberty.

God Save Us from the Queen! and Good Princess, Evil Queen are related — a young, less powerful woman can be good and heroic, but a queen is probably nuts. See also Emotional Powers, With Great Power Comes Great Insanity.

No Escape from Storm Inside

No Escape from Storm Inside