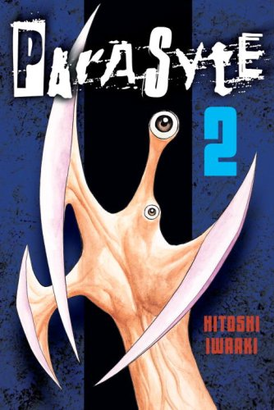 Parasyte (Japanese: 寄生獣, Kiseijuu) is a Science Fiction seinen manga by Hitoshi Iwaaki. It ran from 1988 to 1995 and is particularly famous for its usage of Body Horror. It's kind of like Devilman meets The Thing (1982).
Advertisement:

One night, strange spores fall from the sky onto the earth. Out of them hatch weird little worms that quickly infiltrate human neighborhoods, looking for host bodies. The worms crawl or burrow their way into the head of a human host, transforming it and the brain inside. This effectively kills the victim, replacing the host's personality and intellect with that of the parasite. These parasites have a ravenous appetite for the flesh of the species they take over—in this case, humans.

But one specific worm goofs it up - he tried and failed to take over the brain of Ordinary High-School Student Shinichi Izumi instead ends up stuck inside Shinichi's right arm. Because of this unique situation, Shinichi and the parasite, who eventually names himself Migi (meaning "right") are sharing the same body, but still possess their own individual intellects. This gives them an edge in battling the other parasites, who see Shinichi's ability to think independently as a threat. Shinichi also feels compelled to fight other parasites, who kill and eat humans as a source of food, in order to protect humanity; Migi on the other hand, like most other parasites, is incapable of emotion and only fights to preserve his and Shinichi's lives. Thus, Shinichi is forced to deal with all kinds of teenage issues while keeping a horrifying secret and having to battle against hordes of enemies who want to use him or kill him.

Parasyte was first published in North America by Mixx (now better known as Tokyopop), which Americanized every character by changing their names (Reiko Tamura was renamed Tamara Rockford, while Migi was "Lefty" because the pages were reversed, for example), censored some sexual elements (though the graphic violence was left untouched), and did away with many Japanese cultural signifiers in the story. Publishing rights were later obtained by Del Rey, who re-released it, reverting the changes Mixx made and using a more accurate translation.

◊ by Madhouse titled Parasyte -the maxim- (Japanese: 寄生獣 セイの格率, Kiseijū Sei no Kakuritsu) aired from October 9, 2014 to March 26, 2015. The anime modernizes the manga, using the same premise and main cast but also integrating things that were not commonplace during the manga's original run, like smartphones and the internet.

The manga was also adapted into two live-action films in Japan in 2014 and 2015. The films also modernize the setting and are more condensed compared to the anime.

Two collections of short stories set in the world of Parasyte, Neo Parasyte f and Neo Parasyte m, were published in 2016 and 2017. These stories occur during and after the events of Parasyte, showing what became of Shinichi, Satomi, Migi and the parasites.

Sentai Filmworks has announced home video license and distribution for the anime in five territories (North America, South America, United Kingdom, Australia, and New Zealand). Parasyte is one of the most requested titles to air on Adult Swim Toonami (even long before Sentai Filmworks made their announcement for home video rights), and eventually aired on the block beginning in October 2015.

Further tropes in the anime include: