The protagonist of the series. He is a normal high school student who was infected by a Parasite in his right arm. The Parasite, later named Migi, is not hostile towards Shinichi but will do anything it takes to survive and not let Shinichi endanger him. 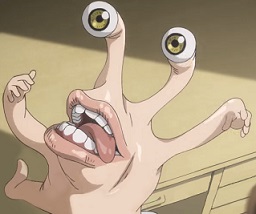 Migi is the name given to the Parasite that infested Shinichi Izumi's right arm, taking over his hand. Migi is unlike most other Parasites in the series, as he didn't develop an urge to eat other humans due to not consuming the brain of his host. This also allowed Shinichi to retain his individuality.

Shinichi's best friend and sometime companion, from before he ever met Migi. While not initially outwadly romantic, she loved his sensitive spirit, and could tell as that starts to slip away.

Kana is a disobedient "bad girl" who develops a crush on Shinichi. She is attracted to him because of his sensitive personality, and because she can sense something "different" about him.

Yuko is Shinichi's classmate and Satomi's friend. Her older brother is a police sketch artist, from whom she learns about the existence of Parasites. She develops a crush on Hideo after he enrolls in their school, before discovering his true nature.

Kana's boyfriend and a leader of a small gang of delinquents.

Another of Shinichi's classmates and Murano's friends.

Uda is, like Shinichi, a human who had a Parasite merge with a part of his body other than his brain. 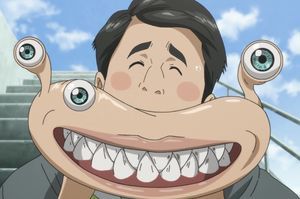 The Parasite lodged in the lower half of Uda's face and extended to his chest. Uda's Parasite originally does not have a name, but is later named "Jaw".

A schoolgirl who befriends Shinichi during his brief stay in Sakurazaki. Her family owns the hotel that Shinichi lodges at as he visits his hospitalized father.

A Private Detective hired by Reiko to spy on Shinichi and caught by Migi when he takes pictures of them. When his assistant Taro goes missing, Shiro asks Shinichi to find him. They encounter one of Hirokawa's Parasites in an underground parking lot that serves as one of their protected "dining areas." He records the ensuing fight between Shinichi and the Parasite, which thoroughly unnerves him, making him decide he wants nothing more to do with Shinichi and the Parasites. 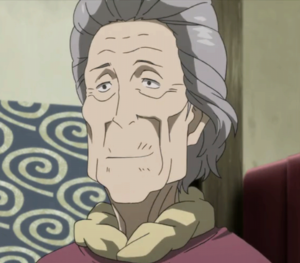 An elderly woman who takes Shinichi in after he gets seperated from Migi during his fight with Gotou.

A veteran detective who first suspected Shinichi for Kana's death.

A military man assigned to the Parasyte Extermination Squad.

A serial killer who mysteriously has the power to sense Parasites.

Other Parasites and related characters

Originally Ryoko Tamiya, one of Shinichi's high school teachers who is also infested by a Parasite. After she kills Ryoko's family, she goes missing and resurfaces under the name Reiko Tamura. She has scientific inclinations, and is driven to discover the biology, origin, and purpose of Parasites.

Voiced by: Makoto Yasumura (Japanese), David Wald (English)
"I will eat when I feel hungry, and I will eliminate any who stand in my way. That's all there is."

A Parasite who took over a man. Because he never bothered to learn his host's identity, he goes by the name "A". He is introduced by Ryoko Tamiya to Shinichi and Migi as the father of her child.

Hideo is a Parasite with a teenager's body who decides to integrate with human society. Hideo enrolls in Shinichi's high school and expresses a desire to become friends with Shinichi, who does not trust him.

Takeshi Hirokawa is the mayor of East Fukuyama City. Beneath his respectable public image, he is the ringleader of a parasite conspiracy to supplant humanity as the world's dominant species.

Miki is a Parasite in the organization led by Takeshi Hirokawa. He is in fact one of five parasites within a single body, created originally as an experiment by Tamura Reiko. He can control three of these parasites in his host body.

Gotou is a Parasite in the organization led by Takeshi Hirokawa. He is in fact one of five parasites within a single body, created originally as an experiment by Tamura Reiko. He can control all five of the parasites in his host body.