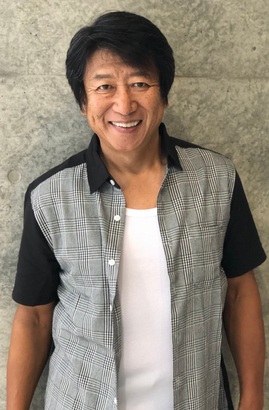 ???: Let me tell you about a story of a man born in Japan in Yokohama, on March 26, 1954. He is a seiyuu well known for his roles as calm, easygoing characters and his characters' combat style can be described as a Fragile Speedster, but at times his voice's Hot-Blooded-ness that can be dialled up to eleven, making him quite an epic seiyuu. Mostly known for his role as Kakashi Hatake. He also sings and for his hobby, it's surfing. Recently, he also made himself known in the public again when he won an award in the modern day. If you want to know his roles, then look below:
...But please beware, to not mistake him for another similarly named voice actor, Fumihiko Inoue. Also, he has no relation to the late Makio Inoue, the late You Inoue, Kikuko Inoue or Marina Inoue.

People call him Kazuhiko Inoue!!!
Why, that's jolly good, thanks for informing Mr... what's your name again?
???: You who ruins your own life in daily basis by reading this very site... DON'T DESERVE TO KNOW MY NAME!!
DON'T MESS WITH US TROPERS!
(much much much later...)
And so ended Kazuhiko Inoue, sent to space for all eternity, never to come back to Earth again, drifting through the void as a half-rock, half-living being. He sought death, but none can come close to killing him. Until eventually, his thoughts blacked out...