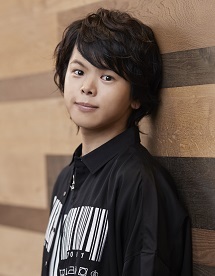 Ayumu Murase (村瀬 歩), born December 14, 1988, is an up-and-coming Japanese voice actor who has a much higher-pitched voice than most male voice actors, making him a good go-to for young boys or androgynous (or even outright feminine

) characters. (Compare Megumi Ogata and Mitsuki Saiga in this regard.)

Though he'd already had a couple of of high-profile roles beforehand, he had his breakout role in 2014 as main character Hinata in Haikyuu!! and has been garnering some major roles since then.

Has rather good English pronunciation, possibly due to having been born in Los Angeles, California.

Much like Kazutomi Yamamoto, whenever his roles are often dubbed in English or any other language, it is usually a female voice actor that would voice his role instead.