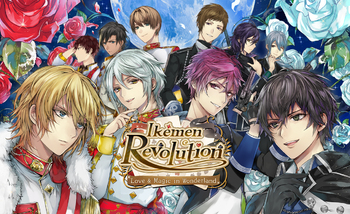 Ikemen Revolution: Love and Magic in Wonderland is a mobile Visual Novel by Japanese company Cybird, the same company behind Ikemen Sengoku. Character designs are done by TCB.

In 19th century London, a young woman leaves her job at a confectionery for the day when she runs into a man fretting about being late. After their Crash-Into Hello, the young woman realizes the man - whom she notes is suspiciously rabbit-like - has dropped a gorgeous pocket watch. The watch being clearly well cared for, and she being a Nice Girl, the woman chases after him to return the watch. He disappears in front of her eyes in St. James Park, and when she takes a step after him, she finds herself falling Down the Rabbit Hole - her last glimpse of home being a bright full moon.

The long fall leads her to the land of Cradle - known to those in the Land of Reason as Wonderland. Reuniting with the man - who introduces himself as Blanc Lapin, but his friends call him White Rabbit - in this mysterious land ruled by magic instead of science, the woman learns that she has become Alice the Second, caught in a war between the Red and Black Armies of Wonderland.

The original Japanese version of the game, イケメン革命:アリスと恋の魔法 (Ikemen Kakumei: Alice to Koi no Mahou) was released in 2016, with the English release arriving in 2018.

The game is available for Android