Manga / Ace of the Diamond 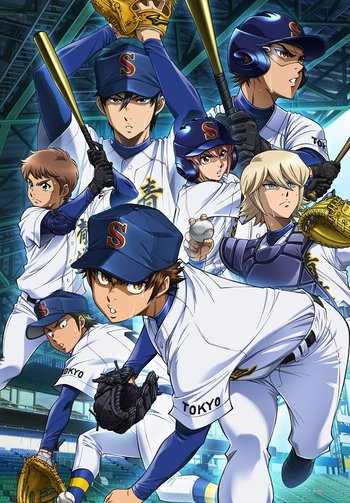 "We're not the Kings! We're the Challengers!"
Advertisement:

Ace of the Diamond, or, Diamond no Ace or Daiya no Ace is a shōnen baseball manga written and illustrated by Yūji Terajima and published by Kodansha. It was originally serialized in Weekly Shōnen Magazine from 2006 to 2015. In 2008, the manga received the Shogakukan Manga Awards for the shōnen category, and in 2010, it won the Kodansha Manga Award for best shōnen manga. In August 2015, a sequel series called Ace of the Diamond Act II began serialization, and is still ongoing.

Sawamura Eijun is a pitcher from rural school Akagi Junior High, where the school's baseball team was fairly badnote To be exact, they never won. Despite this, Sawamura thoroughly enjoyed playing with his teammates, and was dead set on entering high school with them and continuing their journey to Koushien there. However, he's scouted by a manager from an elite private school in Tokyo. After some deliberation and encouragement from his junior high teammates, he decides to carry their dreams with him as he moves to Tokyo to join Seidou High School's powerhouse baseball team. Unfortunately for him though, what he finds there isn't quite what he expected...

by Madhouse and Production I.G aired as part of the 2013 Fall season. The second season, styled Ace of Diamond: Second Season aired as part of Spring season of 2015, and its last episode marked the end of the manga adaptation (as well as, the end of Sawamura's first high-school year, in-universe). Ace of Diamond: Act II also gained an anime adaptation

, this time produced only by Madhouse, which started airing in the Spring season of 2019.