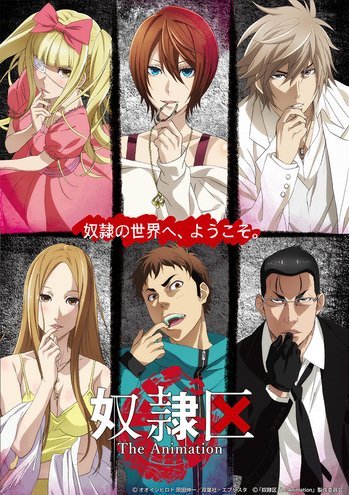 Dorei-ku: Boku to 23-nin no Dorei (Japanese: 奴隷区 僕と23人の奴隷, lit. "Slave District: 23 Slaves and Me") or simply Doreiku, or Doreiku: The Animation, is a Japanese novel series written by Shinichi Okada. A manga adaptation illustrated by Hiroto Ōishi ran for 10 volumes starting in 2012. A live action film was released under the title Tokyo Slaves in 2014, and an anime television series adaptation of the manga animated by Zero-G and TNK aired from April 13 to June 29, 2018.

An anime television series adaptation of Ōishi's manga was announced on October 7, 2017. Ryōichi Kuraya directed and wrote the series, and animation was provided by Zero-G and TNK. Junji Goto provided character designs for the series as well as serving as chief animation director. The series aired from April 13 to June 29, 2018. It was broadcast on Tokyo MX and BS11. Netflix streamed the series in Japan. The opening theme is 'Karakara na Kokoro' (カラカラな心, Dried-Up Heart) by Shōgo Sakamoto and the ending theme is 'BJ' by Pile. Sentai Filmworks licensed the series and simulcasted it on Hidive.