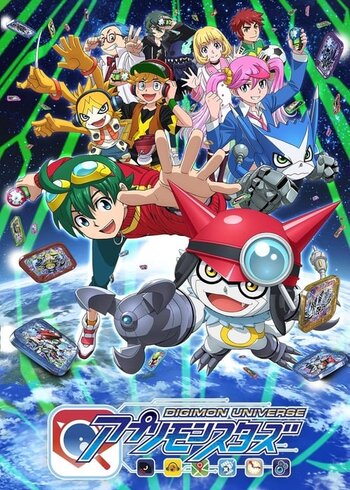 ARE YOU A PROTAGONIST? YES/NO?
Appmon Chip, Ready! APPLIARIZE!
Advertisement:

The 7th anime entry in the Digimon franchise, Digimon Universe: App Monsters is a series that premiered during the Fall 2016 Anime season, and as part of the franchise's App Monsters meta-series.

Everyone in the world uses smartphone applications, and for every app that exists, and living within them are mysterious creatures called App Monsters, or "Appmon" for short. AI lifeforms with the ability to think and act, Appmon come from the space between the real world and digital space called the Net Ocean, helping people and digital systems continue to function.

However, a mysterious AI called "Leviathan" has emerged, causing chaos by hacking the world's systems, and begins to attempt to control the human world by way of the internet. Amidst all this, a young boy named Haru Shinkai is given a device called the AppliDrive, which bonds him to a Search Appmon named Gatchmon. Along with idol Eri Karan and her Buddy Dokamon, and "App Tuber" named Asuka "Astra" Torajirou and his Buddy Musimon, who also receive AppliDrives, can Haru determine Leviathan's true goal, and unlock the secrets behind the world of the App Monsters? Furthermore, another AppliDriver named Rei Katsura, and his partner Hackmon, set their sights on Haru, intent on not allowing him to interfere with Leviathan.

In case you haven't noticed, Appmon changes quite a bit from past Digimon series, creating its own elements that are independent of those used in past stories. However, the same underlying themes of Mons based on digital technology and partnership still remain. Toei Animation's site for the series can be viewed here

. Now also available to watch with subtitles on Crunchyroll.