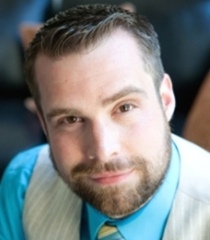 Andrew Love (born November 16, 1981) is a Voice Actor who works for Seraphim Digital Studios and Funimation. He's capable of acting as most personalities, be they Large Hams, Ordinary High School Students, or Stoics, and this versatile range keeps him from being pigeonholed. Thanks to his deep voice however, he's best suited to playing males with larger builds or who are older than teenagers. He's best known as the voice of Akio Furukawa in CLANNAD and Toshizo Hijikata in Hakuouki.
Advertisement:

He was married to fellow voice actress Emily Neves, although in 2015, she announced that they are divorced, but are still friendly with each other.