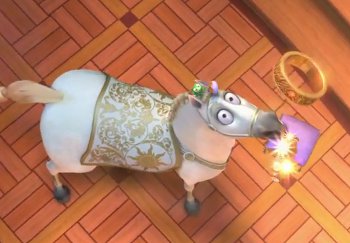 Whoops. One of the many mishaps that can befall a ring before engagement or marriage (or sometimes after).
Advertisement:

A guy (usually) proposes to his (usually) girl. She accepts. The music swells. It's all very sweet. He produces the ring, and puts it on her left ring finger. It should be that simple.

It never is. This trope is about the wacky mishaps that can happen to a ring, the guy planning to offer it, or the woman who may be accepting it.

The trope is often suspended or blown off in animation because of recycling shots and budget considerations. So engaged and/or married characters don't tend to have visible rings. On the occasions when someone in an animated show has a ring they bothered to draw, it's usually a clue that the ring is a MacGuffin or an Artifact of Doom or that the engagement is going to fail for one reason or another.

The wedding ring, in many western countries, is worn on the left hand due to an archaic belief that the ring finger of the left hand has a vein that leads directly to the heart. Some old folk tales say that if a woman wears any ring on that finger while a maiden, she will never marry.

See also Old, New, Borrowed and Blue for when the engagement ring does make it all the way to the wedding, at which point we get wedding ring tropes:

The widow finger is the opposite finger. A woman or man whose spouse has died switches the ring to the opposite hand. Hilarity Ensues in situations where wearing a wedding ring on the "wrong" hand is considered a tell for being gay and on the make. Widows also occasionally wear their wedding ring around their neck on a chain.

There are of course, ring tropes that don't revolve around the wedding and marriage, which may also fit under this catch-all trope involving rings.

The Young Justice fanfic "With This Ring", which has nothing to do with weddings, is found here.