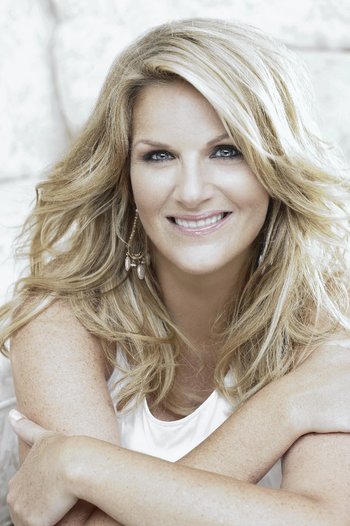 Patricia Lynn "Trisha" Yearwood (born September 19, 1964) is a Country Music singer. She made her debut in 1991 with "She's in Love with the Boy", a number 1 hit on the country charts. Yearwood remained a fairly constant presence on the country charts until the end of the decade with a number of hits on MCA Nashville. After a hiatus, she made a brief comeback in 2005, another in 2007-2008 with an album for Big Machine Records, and a third in 2014 with the Kelly Clarkson duet "PrizeFighter".
Advertisement:

Yearwood is best known for her marriage to Garth Brooks, a longtime friend and sometime duet partner, whom she married in 2005. Before that, she was married to Robert Reynolds, bass guitarist for the country band The Mavericks.

Her songs have appeared on the soundtracks of TV shows like Daria, Ellen and Nashville and movies like Con Air and Stuart Little. And she has also appeared as a guest actor on Dr. Quinn, Medicine Woman and JAG.

Her songs provide examples of: