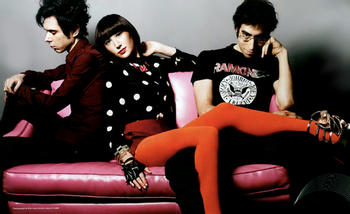 Left to right: Zinner, O, Chase.
A Dance-Punk/Art Punk/Everything band from New York, Yeah Yeah Yeahs formed back in 2000, and consists of singer Karen O, guitarist Nick Zinner, and drummer Brian Chase. While remaining fairly unknown for a long time, they started gaining popularity (like other bands, having a song in Rock Band tends to send a few sales your way).
Advertisement:

The band itself has an odd Rock Trio setup, with each member's stage persona fitting a different stereotype. This has been commented on by the band themselves a few times. In particular Karen O is said to be much more subdued than her stage persona, to the surprise of many fans.