Series / Being Human (US) 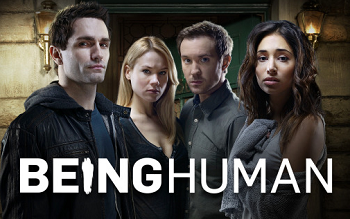 Aidan: Hey, you know—there's a better way to do this.
Josh: Do what, be a better monster? No thank you.
Advertisement:

Being Human is a North American remake of The BBC's Being Human (UK), created by Toby Whithouse. It debuted in January 2011 on Syfy. As with the original British show, it centers around a trio of friends, each a different sort of supernatural being: Aidan Waite (Sam Witwer), a Friendly Neighborhood Vampire; Josh Levison (Sam Huntington), a geeky and uptight werewolf; and Sally Malik (Meaghan Rath), a Cute Ghost Girl; they are later joined by Nora Sergeant (Kristen Hager), Josh's love interest who also gets turned into a werewolf and moves in with the others. They all live in an old Boston townhouse where they try, and usually fail, to be as human as possible.

While the first season of the American version mirrors the plot of the BBC version's Series 1 to some extent, the plots diverge entirely in subsequent seasons, resulting in two shows with very different characters, lore, and storylines.

News of the remake was initially met with a strong negative reaction, as most American remakes of British works end up being relatively poor. However, the show proved to be very successful, being Syfy's highest-rated scripted drama for multiple seasons in a row, and is well-regarded by Toby Whithouse himself. In the summer of 2013, Being Human made it full circle around the Atlantic, with the US version premiering in Britain on the UKTV-owned channel Watch.

The show lasted four seasons before concluding in 2014.