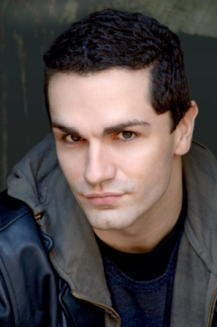 Samuel Stewart Witwer (born October 20, 1977) is an American screen actor and musician best known for his roles as the pilot Crashdown on Battlestar Galactica (2003), Aidan in Being Human (US) and Davis Bloom/Doomsday in the 8th season of Smallville. He has also made a number of other minor appearances on the shows Dexter, CSI, Shark, The Walking Dead, Dark Angel and Bones.

Star Wars fans would recognize him as both the voice and look of Darth Vader's secret apprentice, Starkiller/Galen Marek, in The Force Unleashed, (in which he also voices an uncannily Ian McDiarmid-like Emperor Palpatine). He returned as Starkiller's clone in the sequel, The Force Unleashed II. He also voices the Son and Darth Maul in The Clone Wars. Rebels saw him back again, reprising his roles as Palpatine and Maul, and he continues to voice them in other media to this day. Sam is very much a geek at heart, being a huge gamer and an all-round massive Star Wars nerd, so those roles were a dream come true for him.

He had attended Juilliard School of Drama for a time, but according to his own website

"he got kicked out, but it was all good!" He has said in interviews that grades have never been his thing.

As of late, he seems to be the go-to guy for Villain Protagonists and Anti-Heroes. Sam likes to get inside the heads of his characters and bring out their sympathetic qualities alongside their villainous ones, compelling the audience to root for them (or at least sympathize) no matter what alignment they are at the time. And he can go from a nice, normal guy to being scary-as-hell at a drop of a hat.

Apart from his acting career, he has his own metal rock band called The Crashtones.

He also made a Machete Order variant putting select Clone Wars episodes before Rogue One and A New Hope.