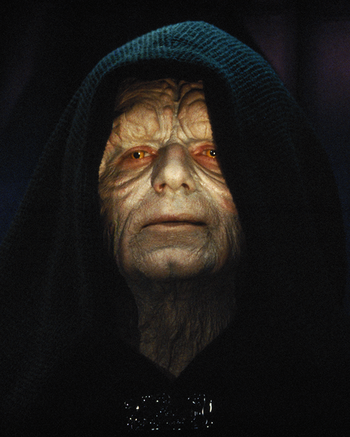 "I am defenseless. Take your weapon, Strike Me Down with All of Your Hatred!, and your journey towards The Dark Side will be complete." 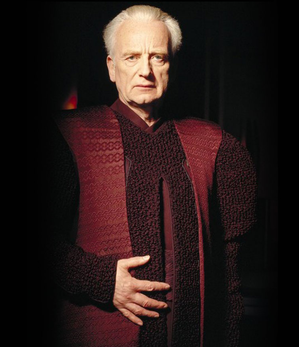 "The Dark Side of the Force is a pathway to many abilities some consider to be unnatural."

Darth Sidious was a Force-sensitive male human who was the Dark Lord of the Sith and founded the Galactic Empire after toppling its predecessor the Galactic Republic from within. He led a double life as the kindly Senator Sheev Palpatine from Naboo, masterminded his rise to Supreme Chancellor of the Republic, the destruction of the Jedi Order, and the dissolution of the Galactic Republic after a millennium and the establishment of a new Galactic Empire, clandestinely ruled by the Sith, with himself as its tyrannical, fear-mongering ruler.

His grand plan began with a proxy conflict on Naboo that he helped engineer, while also pulling the strings to develop a clone army for the Jedi in the conflict in the years to come. Over time, he would help initiate a seccesionist crisis that would require the Jedi to go to war alongside this clone army. After corrupting Anakin Skywalker and having him become his new apprentice, Darth Vader, he utilized a secret order that would purge most of the Jedi and force the remaining survivors to go into hiding where they could be hunted down.

While in power, he used his unchallenged position of authority to secretly uncover various secrets about the nature of the Force in search for immortality, while developing the Galactic Empire into an entity that could suppress any threats to his goals. When Luke Skywalker destroyed the first Death Star, he began to seek to corrupt Darth Vader's son and shift his focus back toward crushing any threats to his rule. Ultimately, he would underestimate Darth Vader's capacity of love for his son, leading to a fatal mistake that would cause his downfall and the destruction of the Empire.

Even after his apparent demise at the hands of the Skywalker family, he was able to use his unnatural abilities with the Force to maintain his consciousness in a clone body — albeit a decaying one that had to be hooked up to machinery — where he spent several decades overseeing a new plan. He would seek revenge on those who had defeated him, create a new order where the act of rebellion was impossible, and achieve true immortality to rule it forever. He would once again be defeated, not just by his own granddaughter, who would reject him and accept the Skywalker family as her own, and not just by the last surviving member of the Skywalker bloodline, who had once been corrupted by the Dark Side through one of his own creations and was now redeemed, but by a fleet of ships led both by soldiers and ordinary citizens who would ensure that his Empire would die with him.

"Nothing will stop the return of the Sith!”