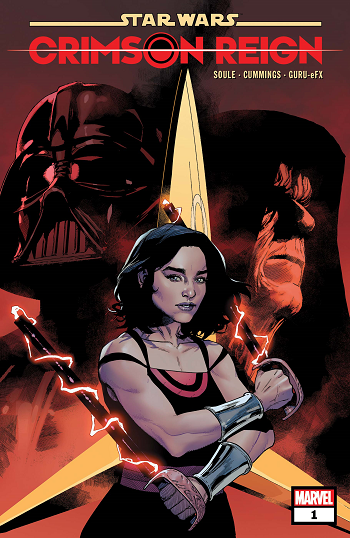 "This is the story of the fall of Crimson Dawn. This story is a tragedy."
—The Archivist
Advertisement:

Crimson Reign is a 2021-2022 Marvel Comics five-part miniseries set in the Star Wars universe. It is the second part of a trilogy written by Charles Soule which focuses upon Qi'ra and Crimson Dawn, with the first part being War of the Bounty Hunters and the finale Hidden Empire. While not a massive crossover event like the preceding series, the events of Crimson Reign do tie into the events of each ongoing comic series.

With her plan to reintroduce Crimson Dawn into the criminal underworld complete, Qi'ra is now moving on to the second stage of her plan: the destruction of the Sith. To do so, she has gathered together a coalition of those who have a grudge against the Sith or lost power to them, including the Knights of Ren, Chanath Cha and the Orphans, and the assassins Deathstick and Ochi of Bestoon.