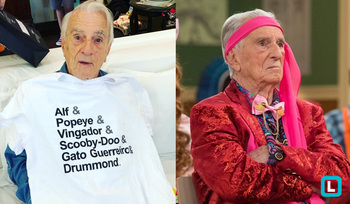 Orlando Drummond Cardoso (October 19, 1919 – July 27, 2021) was a Brazilian actor, voice actor and comedian, best known for his long-lived career in voice acting. One of the eldest voice actors in Brazil, he started working in radio in 1942, and soon was convinced to make voice over, which he wouldn't stop until the last few years. In TV, he was best known for playing the role of Camp Gay "Seu Peru" for the comedy show Escolinha do Professor Raimundo, which he was part of since the first version on radio. His last TV appearance was even a Remake Cameo as Seu Peru in

Orlando had an extremely prominent career as a voice actor during over six decades, but his best known performance is by far the voice of Scooby-Doo, whom he voiced for 40 years. His other works include Popeye in the classic animated shorts, Gargamel, Papa Smurf in the movie, Cringer/ Battle Cat in He-Man and the Masters of the Universe (1983) and many others. His legacy was even carried on by his grandchildren, as three of them became dubbers.

Despite having retired as of 2014, he still made occasional works in voice over, including a D&D Renault commercial

where he reprised the role of Venger, much to the joy of his fans. He also made a brief cameo in the Brazilian dub of Disenchantment and reprised Alf in his cameo within Bumblebee in 2018.

Orlando Drummond passed away in July 27, 2021, three months prior to his 102th birthday. His death came 3 days before the death of another Brazilian Portuguese Scooby-Doo VA, Mário Monjardim (who voiced Shaggy).

Tropes associated with Orlando Drummond and his many, many roles: