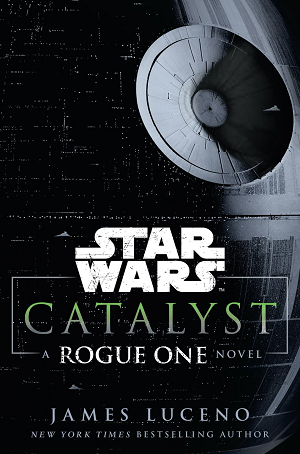 Catalyst: A Rogue One Novel is a 2016 Star Wars Expanded Universe novel by James Luceno (who previously wrote Tarkin in the same continuity, and wrote the Star Wars Legends novel Darth Plagueis), serving as a prologue and background to Rogue One, taking place several years prior during the Clone Wars.

Before becoming the director of the Death Star project, Orson Krennic was a mere member of the project's team. Finding that his old friend, brilliant scientist Galen Erso, has conducted energy-focused research that could be the key to this new superweapon, it also attracts the attention of Krennic's enemies, including the Separatists.

After rescuing the Erso family from Separatist kidnappers, the Ersos are deeply in Krennic's debt. With Galen and Lyra's approval, they allow their studies to be used, under the false belief that they will be used purely for altruism, unaware of Krennic's true plans of making the Death Star a reality.

Trapped in their benefactor's tightening grasp, the Ersos must untangle Krennic's web of deception to save themselves and the Galaxy itself.