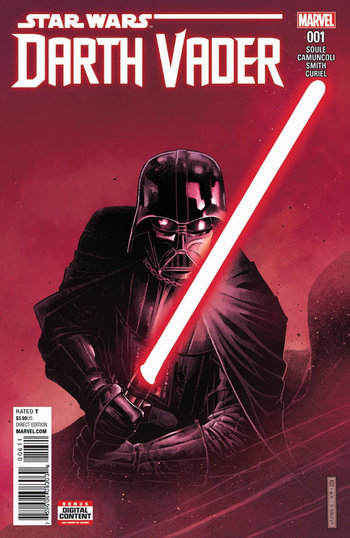 The Clone Wars are over. The Jedi are defeated. Palpatine
has become Emperor, finally in position to bend the galaxy
to his will through the power of the Sith.

Jedi Knight Anakin Skywalker has fallen to the dark side
of the Force. Swayed by Palpatine's promise to help
prevent the death of his pregnant wife, Padmé, Skywalker
betrayed the Jedi and became the Sith Lord Darth Vader.
Defeated by his old friend and former master Obi-Wan
Kenobi, Vader was left to die on the volcanic planet
Mustafar.

Retrieved by Palpatine, and placed into a suit of
cybernetic armor to preserve his life, Vader awakens to
learn that wife has died. Now, for Darth Vader, there is
only rage, pain, and the new Galactic Empire...
Advertisement:

Star Wars: Darth Vader: Dark Lord of the Sith is a 2017 Marvel Comics Star Wars comic series written by Charles Soule (Lando, Obi-Wan & Anakin, Poe Dameron, later Jedi of the Republic) and illustrated by newcomer Giuseppe Camuncoli (the 2015 run of The Amazing Spider-Man and The Superior Spider-Man, later Jedi of the Republic), set in the Star Wars Expanded Universe. It is an immediate sequel to Revenge of the Sith, as well as a prequel to Darth Vader, which takes place after the events of A New Hope.

Taking place immediately after Darth Vader joins Emperor Palpatine in viewing the Death Star, the new Dark Lord must learn to adapt to his new life as a machine rather than a man and without the accompaniment of his former allies at his side, beginning with the construction of his new lightsaber and the birth of the Imperial Inquisition.

The first issue was released on June 7th, 2017, and concluded its run with the twenty-fifth issue on December 19th, 2018. Followed up in production order by Vader: Dark Visions, an anthology miniseries which explores the legends that get built up around Vader as seen through the eyes of the galaxy's various citizens.

The series was comprised of five story arcs: