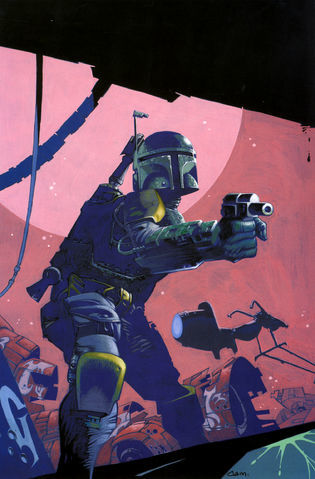 Death, Lies, and Treachery is a 3-part miniseries from the Star Wars Legends that was collected in TPB in 1998. Like Dark Empire before it, it featured art and (very stylized) coloring by Cam Kennedy. Unlike Dark Empire, however, this new series opted not to focus on Luke, Han or Leia, and instead placed bounty hunter Boba Fett (whose grisly death-by-sarlaac-ingestion had been undone, courtesy of the previous miniseries) in the starring role.

Along with Enemy of the Empire, it's one of the few stories that focuses on Fett prior to both his being revealed as a clone and his being confirmed as an actual Mandalorian as opposed to someone who might just be wearing the armor. However, it also holds the further distinction of being one of the few Star Wars stories that makes absolutely no mention of the Force.

The series takes place shortly after Dark Empire, where we find Fett going after three different bounties, one per issue. While each issue is a self-contained story, there's a larger plot that ties everything together, a plot involving a family member of one of these bounties; this family member wants revenge against Fett and the people who hired him...and is powerful enough to have a chance at actually getting it.