Comic Book / Enemy of the Empire 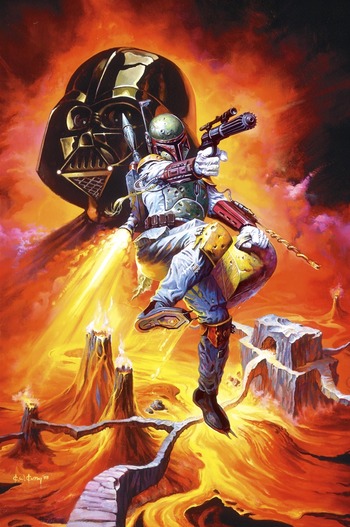 Part of the deluge of new additions to the original Star Wars Expanded Universe that accompanied The Phantom Menace, this six-issue miniseries is an interesting one; along with The Bounty Hunter Wars and Death, Lies, and Treachery, it's one of the relatively few stories to feature Boba Fett as the main character before much had been established about the Mandalorians and, more importantly, it takes place prior to the expansion of Fett's backstory in Attack of the Clones. As such, Enemy Of The Empire is about Boba Fett being awesome without all of the Proud Warrior Race Guy baggage that's come to be associated with the Mandalorians in the Star Wars EU.

Boba Fett is hired by Darth Vader to locate and execute an Imperial deserter named Abal Karda, who shot dead his commanding officer and absconded. However, it soon becomes clear that the Dark Lord's interest does not lie with Karda, but in the plain, kneebshide casket that the Colonel took with him when he went on the run; Fett is to return this mysterious box unopened or suffer consequences. Just in case, Vader secretly dispatches a the assassin Nevo and his gang of thugs to shadow Fett, kill him and take the casket when he finds it.

Following Karda's trail, Fett comes across soldiers who served under Karda during the hellish Icarii campaign, a war that Karda decisively won when he unleashed a biological weapon that rendered the enemy extinct and captured their Queen, a precog, who he later decapitated personally.

The clues left behind by Karda lead Fett to the desolate, volcanic world of Maryx Minor, where he ambushes and kills Nevo's team and tracks Karda to a hermitage where he has claimed sanctuary, the home of the Ancient Order of Pessimists. After killing Karda, Fett confirms his suspicion that the casket contains the severed head of Selestrine, which was kept alive by Karda so he could use her precognitive powers to advance his own career. Instead, she avenged the genocide of her people by manipulating him into engineering his own destruction.

Surviving a pitched battle with Darth Vader that costs him possession of the casket, Fett escapes to hunt another day.

Tropes featured in this miniseries include: