Comic Book / Dawn of the Jedi 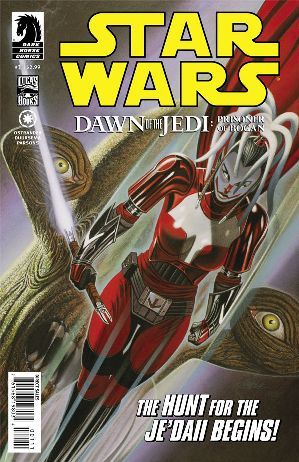 A long, long time ago, in a galaxy far, far away...
In an era before lightsabers, before adherents of the Force were divided into light and dark, what does it mean to be a Jedi? And how did the Order first come to be?
— Comic Book Resources' preview of Dawn of the Jedi.
Advertisement:

Star Wars: Dawn of the Jedi is a Star Wars Legends comic book series from Dark Horse Comics, written by John Ostrander and pencilled by Jan Duursema. It was set in the earliest days of the Jedi Order, beginning in 36,453 BBY, in a time before the polarization of the light and dark sides of the Force. A novel, Dawn of the Jedi: Into the Void, written by Tim Lebbon and set at the same time as the comics but starring different characters, was also published.

Published from February 2012 to March 2014, this comic series is the earliest-set work in the Star Wars franchise. It is also one of the last Legends works to be produced before the continuity was formally discontinued by the Lucasfilm Story Group following the Disney takeover.