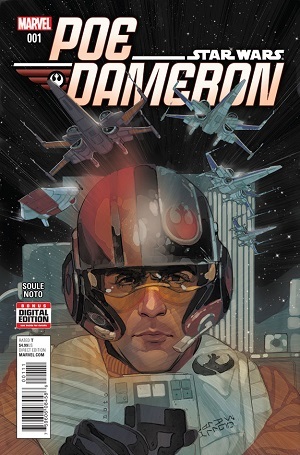 Thirty years have passed since the defeat of the evil
Galactic Empire, but threats of turmoil are rising.

To stem the tide of the First Order, a military force
aiming in secret to overthrow the New Republic,
General Leia Organa has founded the Resistance
movement. Looking to expand her forces, Organa
has recruited the best pilot in the galaxy - POE
DAMERON.

Now, with the help of his droid BB-8 and squadron of
fighter pilots, Poe must act quickly to defeat any
threat to the Republic that comes his way, no matter
how deadly the risks....
Advertisement:

Poe Dameron is a 2016-2018 Marvel Comics series set in the Star Wars universe, written by Charles Soule and drawn by Phil Noto.

Set shortly after Poe's story in Before the Awakening, the series follow Poe as he leads a small unit of Resistance pilots in a search for Lor San Tekka, who holds a vital clue that could lead to Luke Skywalker. They are pursued by Captain Terrex of the First Order, who seeks to beat them to the information.