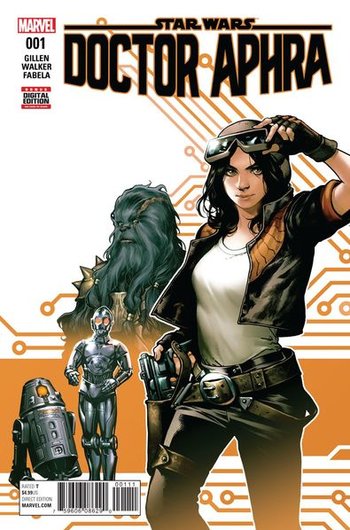 It is a period of opportunity. In a
galaxy oppressed by the cruelty of
Imperial forces, there is little hope
for the future. But for those used to
operating on the fringes, there
is much potential for profit.

Having successfully faked her own death at
Darth Vader's hands, rogue archaeologist
DOCTOR APHRA is back to doing what she does best:
locating and liberating rare artifacts. By
her side are a pair of homicidal droids and
Wookiee bounty hunter Black Krrsantan,
looking to collect on Aphra's debts.

A valuable find has Aphra feeling pretty good.
With her archaeology accreditation, she'll be
able to sell the relic for its true value — but soon
finds that her doctorate has been temporarily
revoked. Even worse, the man behind Aphra's
suspension is her own father....
Advertisement:

Safely away from the clutches of Darth Vader, Doctor Aphra is ready to resume her life of adventure and archaeology, but that won't be so easy with a pair of homicidal droids and the evillest Wookiee in the Galaxy as her traveling companions. Not to mention all the people after her for the money she owes them, including said Wookiee. And the cherry to top it all off, our good Doctor is no longer, in fact, a doctor.

Doctor Aphra is a spin-off comic based on the popular character from Darth Vader. The first issue hit shelves December 7th, 2016. After a 40 issue run that concluded in December 2019, the issue count was reset to #1, with the second run beginning in May 2020 (after being delayed from April due to the COVID-19 Pandemic).

It also received a full-cast audiobook expanding her first appearance from the Darth Vader comic, released in July 2020.

Tropes in this comic book series include: