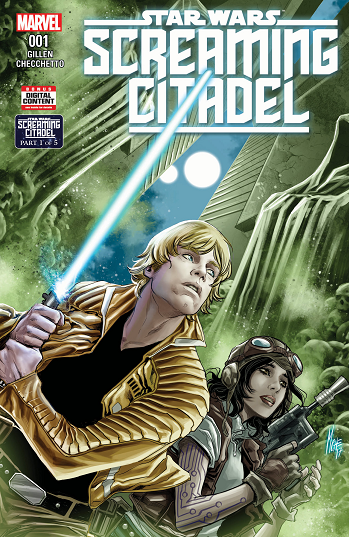 It is a time of turmoil for the galaxy. While the evil
Galactic Empire remains strong, the Rebel Alliance
continues to fight for freedom, and establishes a secret
outpost deep in the Outer Rim.

Young rebel pilot Luke Skywalker struggles with his
destiny. He can feel the Force, but without training, he
cannot become a Jedi Knight. When rogue archaeologist
Doctor Aphra approaches Luke with an
offer—accompany her to meet a queen who can
reactivate an artifact containing the consciousness of
an ancient Jedi—he cautiously accepts.

Once at the Citadel of Ktath'atn—the Screaming
Citadel—Aphra and Luke attempt to curry favor with the
Queen. They are unsuccessful until Luke accidentally
lashes out with the Force and attracts the Queen's
attention—for better or for worse...
Advertisement:

Rebel pilot and rogue archaeologist wander side by side into the darkest shadows of the galaxy as Luke Skywalker reluctantly teams up with Doctor Aphra! The Doctor makes Luke an offer he can't afford to pass up... one that leads him to a very rare gathering at the heart of the infamous Screaming Citadel of Ktath'atn. Will Luke find what he's looking for? Can Aphra be trusted? Or will they both wind up victims of the Citadel's Queen? Meanwhile, Leia and Han attempt to rescue them from the Citadel, only to find themselves further mixed up in the situation...