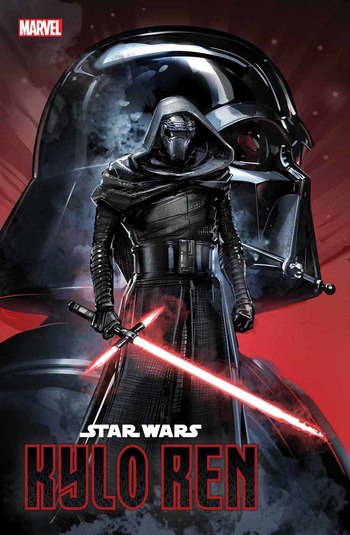 Star Wars: The Rise of Kylo Ren is a four-part comic book miniseries set in the Star Wars Expanded Universe, written by Charles Soule and drawn by Will Sliney. The story is partially inspired by notes provided by J. J. Abrams and Chris Terrio for Kylo Ren's backstory in The Rise of Skywalker, after The Force Awakens first hinted at it and The Last Jedi expanded upon it — recontextualizing much of what the audience knows about the character. Most of the story is set in the immediate backstory of the Sequel Trilogy, just as the title character began his Start of Darkness.

Ben Solo, who is the son of Han Solo and Leia Organa, was handed off to the Jedi Knight Luke Skywalker at a young age, and he quickly became his uncle's star pupil as the Jedi Master begun training a new generation of Jedi students all at once. Due to possessing a raw, untamed power with the capacity for both darkness and light within himself, Ben also became a target for corruption by Snoke, a mysterious figure tied to the Dark Side of the Force, who presents himself as an ally to the young boy. Ben himself feels the weight of massive expectations placed upon him, as the son of two of the New Republic's greatest heroes and the apprentice of one of the strongest Jedi who ever lived, bearing upon him, and he has questions about whether or not he's truly in control of who he's meant to be.

At some point during his childhood, Ben, Luke, and Lor San Tekka go to a Jedi outpost on Elphrona for supplies, with the young Jedi frustrated that his uncle hasn't yet allowed him to reach his true potential as a student. While there, they encounter the Knights of Ren, lead by their eponymous leader Ren — who ultimately prove to be no match for Luke. Before leaving the supplies to Luke, Ren presents an offer to the young child — the promise of another path for him to take. Ben begins to question if his path as a Jedi is what's right for him, as Ren leaves an open offer for the young boy to one day join their ranks.

Flash forward several years later, and Ben Solo believes that he's accidentally killed his uncle in self-defense after a crucial misunderstanding. While Ben is angered and confused by the incident, a sudden storm causes a massive blast that causes the destruction of his Jedi Temple, and many of the people in it — which Ben believes that he's caused. After several of his fellow students arrive Late to the Tragedy, they blame Ben and vow to avenge their master. With nowhere else to turn, Ben is forced to meet with Snoke, who then advises Ben to take up the offer that Ren presented years ago. As he seeks a new identity of his own choosing and is pursued by ghosts from his past, Ben finds himself on a crash course with destiny...

The events of the story were loosely adapted in a more comedic, kid-friendly fashion as one of three shorts in the anthology Halloween Special LEGO Star Wars: Terrifying Tales, with the short in question spoofing The Lost Boys. It stars Christian Slater as the voice of Ren.