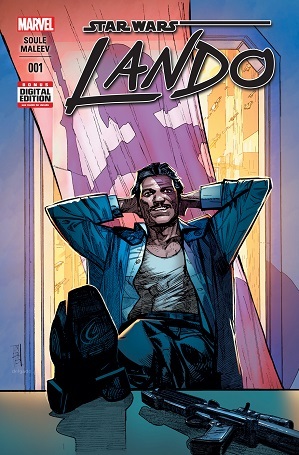 It is a period of scarce opportunity. In a
galaxy overrun by an oppressive and evil
Galactic Empire, there is little hope for a
future free from the Emperor's iron rule.

But with the Imperials distracted by a
growing alliance of rebels, smugglers and
pirates travel the galaxy for fortunes
found only by those daring enough to
grasp them.

LANDO CALRISSIAN, a man trying to
make his way through an uncaring
universe, is willing to bet all he has for a
single score — and it begins with the deal
of a lifetime....
Advertisement:

Lando is a 2015 Marvel Comics Star Wars Expanded Universe mini-series written by Charles Soule and art from Alex Maleev. It is the second in a series of mini-series released by Marvel that focuses on a main character from the Original Trilogy.

Shortly after the destruction of the Death Star by the Rebel Alliance, Lando Calrissian and his partner-in-crime Lobot find themselves indebted to the crime lord Papa Toren on the planet Castell. In order to pay off the debt while also earning a big payday, they agree to steal a pleasure ship filled with artifacts from an Imperial shipyard with the help of scholar Korin Pers and warriors Aleksin and Pavol. Unfortunately for them, the ship turns out to belong to Emperor Sheev Palpatine himself, turning a simple job into an all out effort to stay alive as Imperial forces hunt them down.