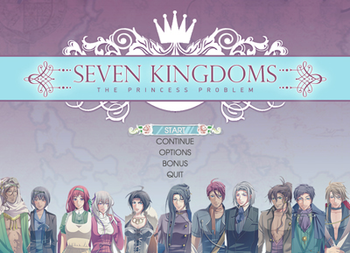 A hundred years ago, with the seven kingdoms on the brink of destruction after centuries of constant war, one princess gathered the younger members of each nation's royalty and nobility to a mysterious island, hoping to use the proximity and neutral ground to foster understanding and form connections that would lead to peace. She succeeded beyond anyone's expectations.

Thereafter, every seven years, each kingdom sends seven delegates from among its best and brightest for a seven-week Summit, to form alliances and strengthen international relations. Over time, however, much of what was learned during that first Summit has been forgotten. The peace that was formed a hundred years ago has never been closer to falling apart.

You, the player character, are one of the delegates arriving on the island for the latest Summit, from any of nine possible backgrounds and with any number of possible goals to achieve. You might find love, form an advantageous political alliance, solve a mystery, maybe even influence the state of the world as you know it... if you can survive long enough amidst the Summit's tangle of secrets, hidden motives, and cutthroat politics.

Seven Kingdoms: The Princess Problem is a Ren'Py-based Visual Novel by Azalyne Studios for PC and Mac. Described as a "Romance Game / Political Fantasy," the game involves honing a broad array of skills and knowledge to effectively interact with its cast of characters and uncover the secrets going on beneath the surface of the Summit. A demo was released in June 2015, available for download from the official website

. The game went to

Kickstarter in August 2015 and smashed through all of its initial stretch goals within the first two hours. In January 2017, Azalyne Studios released a limited-time version of the demo extended to include new content through week five of gameplay.

Not a new expansion of the old school strategy game Seven Kingdoms.

The Visual Novel contains examples of the following tropes: