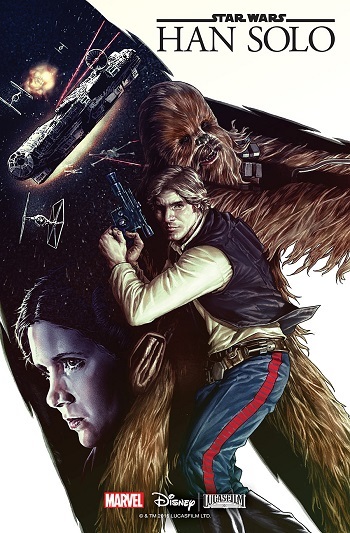 It is a period of unrest. In a galaxy oppressed by
the Empire's unrelenting brutality, there is little
hope for change. Nonetheless, rebels have banded
together to fight back against such corruption.

While the Rebellion grows in power, Imperials fight
to crush any hope for an overthrow. With the
Empire's hands full, the opportunities for crime are
endless.

HAN SOLO has taken a step back from the rebel
cause, returning his focus to what he does best -
smuggling. Untrusting by nature, he's skeptical of
any who cross his path. Unfortunately for him, he
cannot stay under the radar forever....
Advertisement:

Star Wars: Han Solo is a 2016 Marvel Comics Star Wars mini-series written by Marjorie Liu and art from Mark Brooks. It is the fourth in a series of mini-series released by Marvel that focuses on a main character from the Original Trilogy.

Set shortly after A New Hope, the series follows Han Solo and Chewbacca as they are recruited by the Rebel Alliance to rescue three rebel agents carrying vital information. The catch? All the other members of the spy network have been hunted down and killed by the Empire, indicating a mole has leaked their identities. In order to rescue them secretly and discreetly, the surviving three agents are waiting on the worlds serving as pit stops in the Dragon Void Run, one of the most dangerous and prestigious starship races in the galaxy which Han has always dreamed of winning.

Determined to rescue the rebel agents and win the Dragon Void Run, Han and Chewie will have to contend with the race's deadly obstacles, ruthless racers, and the possibility that the spy has leaked their plan to the Empire...