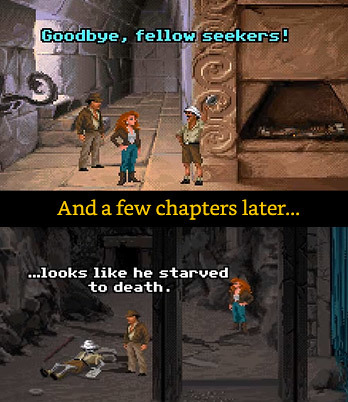 Searching caves and Ancient Tombs for artifacts is the bread and butter of any Adventurer Archaeologist. During such a mission they are likely to find the remains of a less fortunate explorer who went into the Temple of Doom looking for the MacGuffin ahead of our hero. The defining element of such a Doomed Predecessor is that they are a tragic example of a Chekhov's Gunman (or Chekhov M.I.A. if the character was just noted as missing), as our hero knew about their existence; either they met earlier on or they were mentioned in a myth or the news to have gone on but never returned from their quest.

Usually, these characters got trapped in a chamber but didn't have the means to escape. Perhaps they were not as smart as our Guile Hero or they were missing a vital piece of the Dismantled MacGuffin to activate the secret door mechanism. Anyhow, they failed their quest and probably died a Cruel and Unusual Death all alone and unseen in a Sealed Room in the Middle of Nowhere. For the extra bit of tragedy, writers will often make these characters fail right before having reached their destination.

Note that this trope is not entirely exclusive to archeological settings. A similar principle can apply to mystery or action-adventure stories where some previous person investigating the mystery or conducting some mission has also met an untimely end.

Doomed Predecessors are likely to be an indispensable source of clues and items. Expect them to have a key, map or manuscript in their possession which our hero has to pry from their cold, dead hands.

Sometimes the Doomed Predecessor poses as an Evil Counterpart to our hero, as their objective was personal gain instead of the artifact's historical value, making their death inevitable and well-deserved.

Compare the less personal This Way to Certain Death when random corpses (or parts thereof) line the way to the Treasure Room, reminding the hero and the viewer of the apparent dangers ahead. Also compare Redundant Researcher, a foil for our hero, who did all the groundwork to unlock the ancient secrets but fails because, well, he is not the hero. Also compare Send in the Search Team. Contrast Seeking the Missing Finding the Dead where the entire point of the quest is to find the missing character(s).

This is a Death Trope, all Spoilers will be unmarked ahead.