Spoilers for The Force Awakens are unmarked. You Have Been Warned. 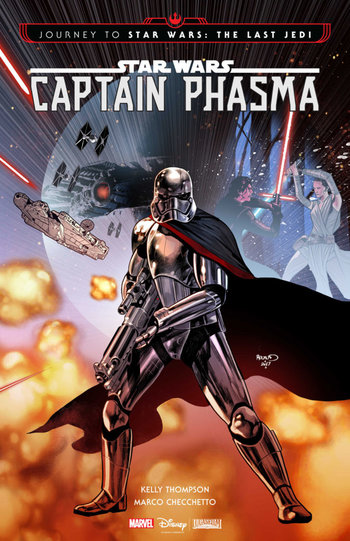 Captain Phasma is a four-issue miniseries in the Star Wars Expanded Universe, written by Kelly Thompson, who previously wrote Annual #2, and drawn by Marco Checchetto, who previously drew for Star Wars: Shattered Empire and Obi-Wan & Anakin. It is a part of the multimedia project, Journey to Star Wars: The Last Jedi.

The series takes place from Captain Phasma's perspective during The Force Awakens, then extends to between that and The Last Jedi. After being defeated and humiliated by members of the Resistance on Starkiller Base, Captain Phasma sets out to frame and silence a witness before he can inform the First Order command of her treachery.

Not to be confused with the Phasma novel, which delves into Captain Phasma's backstory.

The first issue is to be released in September 2017.

Tropes in this comic series include: