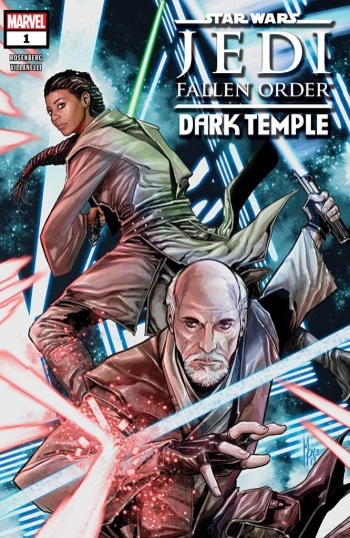 The Jedi Knights are gone and forgotten. Destroyed by their ancient enemies - the Sith- after a long civil war engineered to bring about their downfall and a new age: the age of the Empire.
But not long before, the Jedi were the guardians of peace and justice in the galaxy, loyal to the Republic for more than 1,000 generations and well trained in the mystical powers of the Force. The Order dispersed its wise and powerful warriors to settle disputes, seek knowledge and keep the people of countless star systems safe.
And the bond of one Jedi team, a Master and Apprentice, is about to be tested like never before. There are some
threats that are far too insidious...and far too ancient to be overcome with just the swing of a lightsaber. Jedi training cannot prepare a Padawan student for everything....
Advertisement:

Jedi Master Eno Cordova and his headstrong apprentice Cere Junda are assigned by the Jedi High Council to assist in overseeing the examination of a temple on the planet Ontotho, which recently joined the Galactic Republic. However, their mission quickly spirals out of control as corporations, rebels, and other mysterious forces fight to gain control of the temple and its secrets.