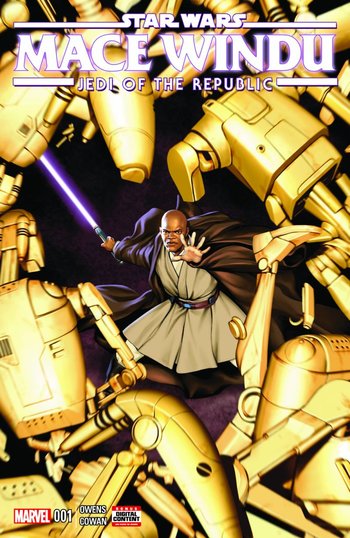 Cover for Issue #1 of the Mace Windu arc.
Advertisement:

For over a thousand generations, the Jedi have been the peacekeepers of the galaxy…but now, at the dawn of the Clone Wars, they find themselves in a new role: generals in the Army of the Republic. The Jedi must make peace with their new role, or be lost to the violence around them!

Jedi of the Republic is a 2017 Star Wars Expanded Universe comic series, taking place from the perspective of numerous Jedi during their service to the Grand Army of the Republic against the Separatist threat. It is a sequel to Attack of the Clones and a prequel to Revenge of the Sith, taking place alongside The Clone Wars.

The first arc, Mace Windu, revolves around the titular character as he leads a small unit of Jedi into battle. The first issue is to be released in August. It is written by Matt Owens (Elektra (2017), Luke Cage (2016)) and illustrated by Denys Cowan.

Not to be confused with the Jedi or Republic comic book series from Legends, which also contained similar subject matter to Jedi of the Republic.

The first issue is to be released on August 30th, 2017, delayed a week after its original intended release date.