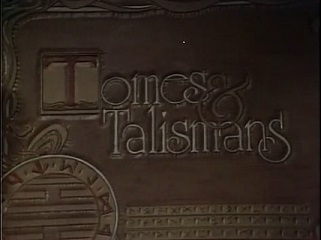 "Atmospheric pollution and overpopulation were serious concerns on Earth by the end of the 21st century. Human movement was severely limited. The Wiper colonization of 2103 could not be stopped. This primitive species from the Dark Star solar system found Earth perfect for their favorite pastime: the disruption of all communication and data technology. The spread of Wipers and pollution increased the need for the scientific search for solutions. In 2117, the world-wide government voted for the gradual evacuation of all Earthlings to the White Crystal solar system. This report was completed in 2123 during our final days on Earth. We leave it for those who may return here in a storage vault for human learning...the last Earth library."
—Opening Narration
Advertisement:

Quite possibly the finest post-apocalyptic educational series about library science ever produced by Mississippi Public Television.

In 2123 humanity is evacuating Earth for the White Crystal Solar System, due to pollution and an attack carried out by the nefarious Wiper race, a group of aliens that are determined to interfere with communication and data technology. The One World Order is preparing a complete library of all Human knowledge which is hidden underground. A desperate search for an important missing volume of recent history begins in the library in the outskirts of the city. The library team leader, Ms. Bookhart, is stranded in her bookmobile and is suddenly metabolically suspended for 100 years by a being known only as "The Universal Being".

She awakens in a world under the control of the Wipers having been discovered and awoken by four children—Aphos, Abakas, Varian, and Lidar—members of another group of pacifistic, tech-savvy extraterrestrials known as "The Users". The children, along with Ms. Bookhart, rediscover the hidden library, and in the course of the series she teaches them how to use it. When the Wipers lay siege to the User base with an entrapping shield and plan an attack, the kids and Ms. Bookhart (later assisted by Colonel Holon, the father of Aphos and Abakas) must decipher a cryptic message from the Universal Being to find a way to defeat the Wipers and save their people. Yes, the world is saved through mastery of library science.

Made in 1985 as a 13-episode serial drama, and (obviously) intended to teach children about various library and research concepts, Tomes & Talismans is now extremely dated and clearly had a rather limited budget, but it gets the job done and remains surprisingly entertaining and even intriguing throughout, less because of the educational segments and more because of the ongoing mystery that must be solved.