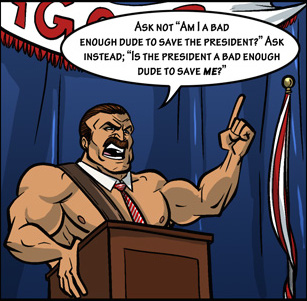 "I'm not one of those Beltway pansies. I could break the President in two with my bare hands!"
— Senator Armstrong, Metal Gear Rising: Revengeance
Advertisement:

In most stories, politicians generally eschew physically aggressive situations and try to avoid direct involvement in combat either for the sake of their position or themselves. They generally have their security or guards handle the threats while they head off to a safe location or sit things out. Sometimes they act as The Chessmaster and act on and manipulate events behind the scenes while keeping a careful distance. This character is not one of those politicians.

This trope involves the circumstance where a character notably involved in politics or heavily involved as a coordinator of the people and their government gets his hands dirty when coming into contact with a threat. When things get dangerous, they’re the first to launch an attack, either physically or using a weapon. This political figure doesn’t need guards or security and prefers to take down their opponents themselves. In other words, this is a politician who is actively involved in combat situations during their political career.

Compare Royals Who Actually Do Something and Warrior Prince.