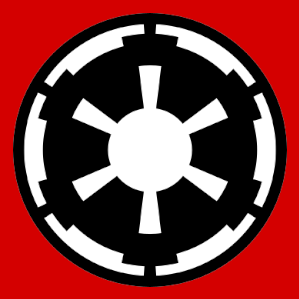 "In order to ensure our security and continuing stability, the Republic will be reorganized into the first Galactic Empire, for a safe and secure society!"
— Emperor Palpatine's Declaration of a New Order

Established by then-Supreme Chancellor Palpatine (AKA Darth Sidious) at the end of the Clone Wars as a successor-state to the collapsing Galactic Republic, the evil Empire ruled the galaxy through fear, intimidation, and tyranny. With its vast military force and arsenal of terrifying superweapons, few dared to challenge Emperor Palpatine's regime, save a few pockets of resistance that converged to form the Rebel Alliance.

Following the death of Palpatine and the Imperial military's devastating loss at the Battle of Endor, the Empire fractured into multiple bickering factions vying for control, with some military leaders outright seceding to rule as warlords. Most of these remnants either collapsed to infighting or were defeated by the New Republic; those that did not fled to the Outer Rim and the Unknown Regions, where they reorganized into a military junta known as the First Order.

Under Imperial rule, most sectors were ruled by a military governor, or "Moff", who held absolute authority over the region's politics through force of arms. 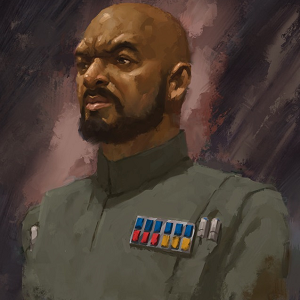 The Grand Moff in charge of the Exterior, a remote region of the Outer Rim. He is recruited by Fleet Admiral Gallius Rax to be a part of the Shadow Council, a group of high-ranking Imperials who effectively run the Empire six months after the Battle of Endor.
Advertisement:
Lozen Tolruck

The Imperial governor of Kashyyyk. Following the death of the Emperor, he became an independent warlord who kept minimal communications with the remaining Imperial fleet. 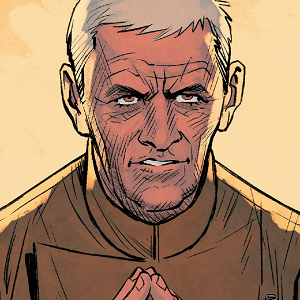 "Welcome to politics, Ms. Pryce. Welcome to the real Coruscant."

"Let's see how high and mighty Grand Moff Tarkin is when I'm shoving his dirty little secrets down his throat."

Governor of the Tangenine sector in the Core Worlds, Ghadi was a political rival of Grand Moff Tarkin.

See his entry on the Imperial Remnant page. 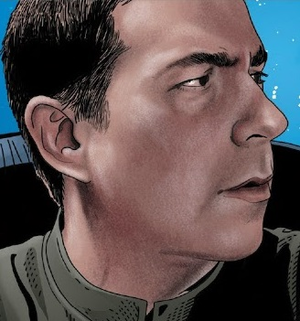 Moff of the Calamari Sector, Hubi was the true power on Mon Cala during the reign of the Empire and kept a tight leash on the inhabitants of the sector. He is targeted for kidnapping by the Alliance in order to access an Imperial prison where Mon Cala King Lee-Char is being held.
Valco Pandion

Appearances: Aftermath
"An Empire needs a leader. An Empire demands an emperor."

A powerful Imperial Moff in command of the Star Destroyer Vanquish. Several months after the Battle of Endor, Pandion attends a conference of high-ranking Imperials on Akiva to determine the course of the Empire.
Raythe

Appearances: Battlefront II
"Now more than ever, power is the only way to peace. Admiral Versio will cleanse the galaxy, Commander. To remind them who is really in control."

The commander of the Dauntless and one of the high-ranking Imperials chosen by Palpatine to lead Operation: Cinder.
Ssaria 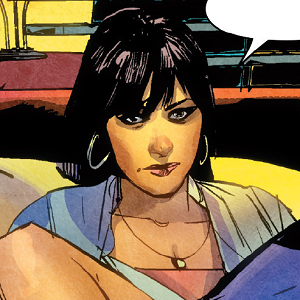 Appearances: Lando
"I am an extension of the Emperor's will. My actions here simply execute his directives. The Emperor is the mind. I am his tool. Is a tool responsible if it is used to kill someone?"

A Moff and Governor of Castell and its surrounding sector.
Moffs on other pages

The following officers are only those who don't fit in other categories. 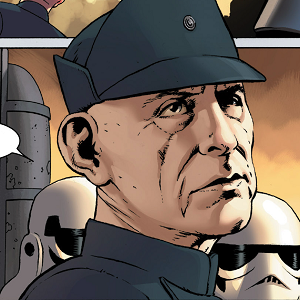 Appearances: Star Wars (Marvel 2015) | Darth Vader
"Outer Rim scum. I can smell them already. Be on the alert. If anything seems even remotely suspicious... kill them all."

A high-ranking Imperial officer in charge of Weapons Factory Alpha on the moon Cymoon 1.
Dunum 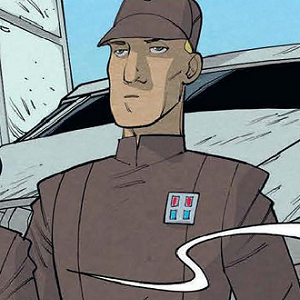 Appearances: Rebels Magazine
"My only goal is the smooth running of the Empire and its facilities. After seeing the mess [Grint] and Aresko have made, and if the opportunity arose, why wouldn't I want to make this a great facility again?"

An officer from the Lothal Imperial Garrison. At some point, he left and became Assessor Potalla's aide on Coruscant. When he returned to Lothal to help Potalla evaluate the local garrison, he was framed by Aresko and Grint for sending an Imperial access code to the Ghost crew during a break-in on the Imperial Complex.
Earll 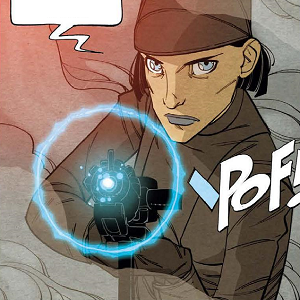 Appearances: Rebels Magazine
"The Senate has no jurisdiction here, especially in matters relating to treason. Just be grateful you're still alive."

An Imperial military officer. Upon receiving a distress call from Senator Nadea Tural, the commander and a squad of Stormtroopers boarded the Ghost in a rescue mission. She ordered an immediate execution of the rebels aboard the ship, but this would come into conflict with Tural, who demanded for a fair trial of the crew, which was rebuffed by Earll. This caused the senator to reconsider her loyalty to the Empire and she turned against the commander.
Tag Greenley & Bink Otauna

Those Two Guys originating from the Star Wars: Tag & Bink comics. They are working menial security detail at the Imperial Flight Academy on Carida.
Potalla 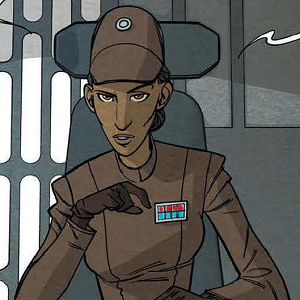 Appearances: Rebels Magazine
"I prefer to be on Coruscant where I'm kept very busy. But then I can't win every time."

An Imperial Assessor sent to evaluate her fellow Imperial officers. When she gets sent to Lothal to evaluate the local garrison, she concluded that Commandant Aresko and Taskmaster Grint had become complacent and reported this to Grand Moff Tarkin, suggesting he should intervene.
Tifino

An Imperial officer whose unit discovered a cache of kyber crystals on Jedha, earning him a place under Director Krennic's command. 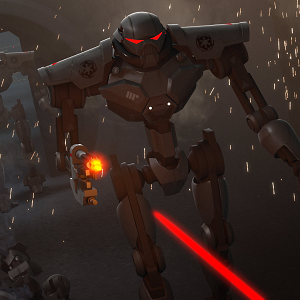 A series of sentry droid utilized by the Galactic Empire aboard their cargo ships.
E-XD Infiltrator Droids 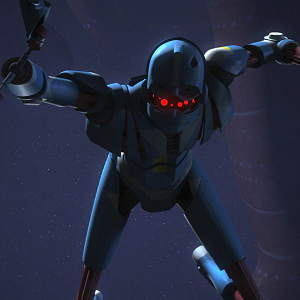 A new series of Imperial probe droids disguised like protocol droids in non-combat situations in order to infiltrate and perform reconnaissance on areas such as rebel bases. Upon entering combat, they transform into combat droids.
KX-series Security Droids 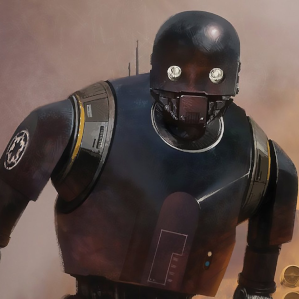 Also known as enforcer droids, these were a series of Imperial security droids tasked to bodyguard and protect items and individuals of high importance to the Empire, such as the Citadel Tower on Scarif due to its importance in the Death Star project.
Sentinel Droids 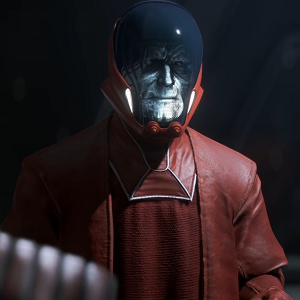 A part of Palpatine's contingency plan in the event he is killed. They are to be sent to designated Imperial officers to assign them missions such as Operation: Cinder.
IT-0 Interrogation Unit 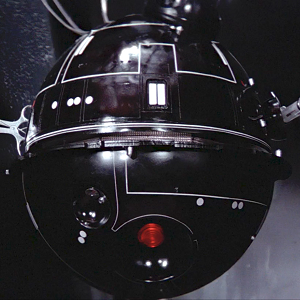 Appearances: The Bad Batch | Rebels | A New Hope | Doctor Aphra | The Mandalorian
"And now, your highness, we will discuss the location of your hidden Rebel base."
— Darth Vader

Torture droids that were designed by the Imperial Department of Military Research. They were used to interrogate Leia into revealing the location of the Rebel Base.
DRK-1 Probe Droids 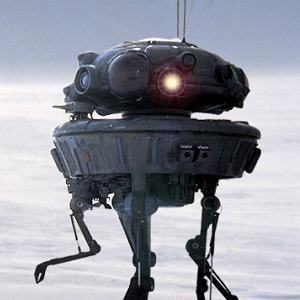 A reconnaissance droid manufactured by Arakyd Industries. These droids were known for discovering the Rebel base on Hoth. 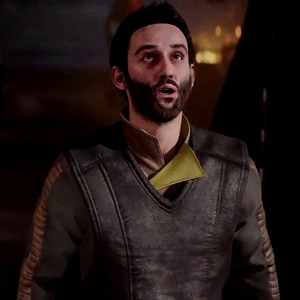 An Imperial statistician who defected in the waning years of the Empire. He provided the rebellion with critical information that would lead to many victories, including the liberation of Kashyyyk.
Jenneth Pilar

A goods broker who turned his skills to working for the Empire. He selected out-of-the-way moon Raada as an ideal place to grow a plant for nutrition supplements that leeches nutrients from the soil.
Nurse 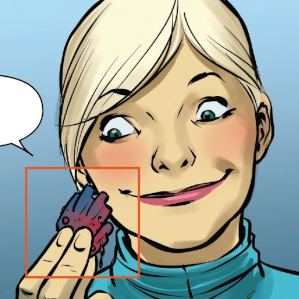 A personal medical caretaker for Darth Vader who became obsessed and psychotically in love with him.