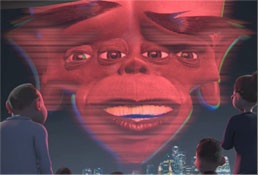 So, just to recap: I come in peace, I mean you no harm, and you all will die. Gallaxhar out.
Eon: And what happened to your head? It looks ridiculous!
Kaos: WHAT?! My head is awesome, I tell you! Fear it! Fear my GIANT FLOATING HEAD!
— Skylanders: Spyro's Adventure
Advertisement:

When the alien Glorious Leader, Evil Overlord and Mad Scientist want the world to know about their nefarious doings, they will usually take control of every TV (and sometimes even computer screen) to give their Motive Rant and/or New Era Speech. However, if they have access to powerful Hologram projectors they may also/instead project themselves over every city as a Huge Holographic Head.

Needless to say it also includes a hidden sound system powerful enough most rock bands would kill for (and metal bands would sacrifice fans onstage for) in order to let everyone hear them. For some reason, subtitles under a big floating holographic head just aren't as impressive as a big booming voice.

If they don't have the tech to do this, they may substitute it by using huge screens on dirigibles or buildings, which is a favorite for dictators.

PAY NO ATTENTION TO THE EXAMPLES BELOW THIS HEADER: