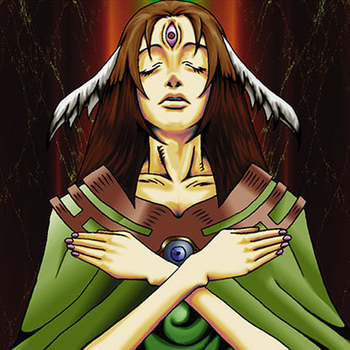 "A pleasant-faced man steps up to greet you
He smiles and says he's pleased to meet you
Beneath his hat, the strangeness lies
Take it off, he's got three eyes"
— Rush, "The Twilight Zone"
Advertisement:

An eye grants sight, and thus symbolizes perception and understanding of the world. Two eyes gives the ability to perceive depth, so what new dimension might we be able to perceive with a third?

This is an Older Than Print trope that goes at least back to the Hindu Puranas, and shows up in various other religions as well. The Third Eye takes the eye's symbolism Up to Eleven, representing supernatural and mystical perception, possibly even spiritual enlightenment. As such it's not necessarily biological; characters might make a glowing eye tattoo appear on their forehead when using their magical perception abilities such as Aura Vision and Blindfolded Vision.

Aside from the spiritual, a Third Eye is common among mutants, aliens, and strange creatures. With them it usually provides purely worldly Super Senses related to vision, especially True Sight.

As the picture shows, it is typically in the center of one's forehead and might be parallel or perpendicular to the two normal eyes. It may also be made more otherworldly by being a different color than the two normal eyes. While this trope is pretty neutral as to heroes and villains, usually evil characters have the mutant type third eye while heroes sport the more "enlightened" mystical one. Either way, expect the owner of the eye to suffer from Freakiness Shame if not outright persecution.

It's frequently paired with other Eye Tropes and Fate and Prophecy Tropes. One of the few ways to put Extra Eyes in odd places without incurring Eyes Do Not Belong There. Compare Pineal Weirdness — the third eye is sometimes identified with the pineal gland. Many characters make do with placing a Power Crystal over this spot. Extra points if it's eye shaped... or used to be an eye! Beware, though, sometimes having a third eye sets you up for a Poke in the Third Eye.