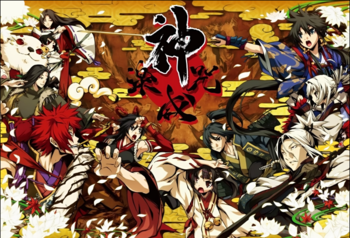 An Expedition that escalated way too much!
Advertisement:

A visual novel developed by Light, written by Takashi Masada and illustrated by G Yuusuke and the third game in the Shinza Bansho Series.

In ancient Ashihara no Nakatsukuni, generals fought each other to gain the favour of the emperor. They attempted to invade the uncharted eastern lands, but suffered total defeat at the hands of demons more intelligent than humans. Three hundred years later, the land of the gods, Shinshuu, has locked itself away from all foreign countries, but an air of gloom begins to drift in from the east. They are forced to head east again to drive away the demons.

Originally released in 2011. Similarly to Dies irae ~Amantes amentes~, an All-ages release for the PS Vita, Kajiri Kamui Kagura Akebono no Hikari was released in 2013 with a Windows version released in the same year. This version adds extra chapters and unlockable other stories.